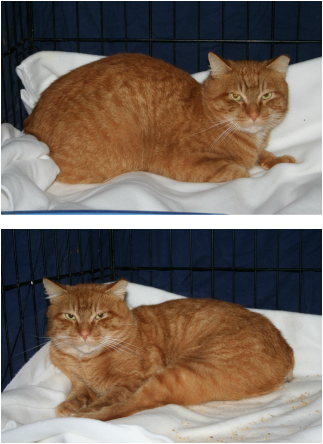 Shorty is a part time resident in one of our feral colonies. He comes by every couple of days to get a good meal. 2 years ago when shorty first showed up in our colony he was very feral,  not neutered and had about 3 inches of his tail missing. We trapped him and took him to be neutered. The vet said the tail injury was old and healed. We released Shorty to continue his life. A few weeks ago he was coming to eat and from a distance we could see the most horrible infection on his now 4" tail, the pain must have been unbearable.

We immediately began trying to trap shorty to get him help. We believed his days were numbered with such a severe infection. The problem was that Shorty is smart and savvy boy! He'd been trapped before and was not falling for that old trick again!!  Thankfully with some persistence and some really smelly fish food, 2 weeks later we finally had him! It was just in time. We took him to Sand Road Animal Hospital where the staff stayed late to do emergency surgery and remove the rest of his tail. Even the vets and staff were shocked at this poor cats condition!

Shorty is now recovering very nicely in foster care. He is very feral but is relaxed I'm sure he feels so much better!

Your donation is tax deductible.