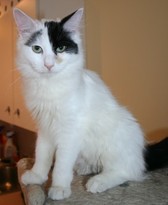 Nakita has a cuteness and personality that could make even the hardest of people smile! But she has already used 4 of her 9 lives surviving against the odds!
When Nakita was taken in by Better Days Rescue Fund she was about 6 weeks old, starving -  so skinny you could feel all of her bones-- and she was sick. I'll never forget when I saw her being carried out of the house where she was born. She was so tiny and sick but she was beautiful and she was clinging to the person carrying her like she would never let go. The man at the house said she was “ugly and would never get a home,” but I saw a beautiful spirit with a larger than life personality, and I was instantly in love with her. 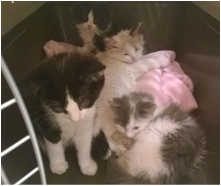 ​Seven kittens were taken in that day, all were desperately sick but we thought we might lose Nakita. To begin with they were all malnourished and skinny. They were dirty from living in poor conditions. They had upper respiratory infections that were clogging up their noses so that they were forced to breathe through their mouths. They also had calici virus, which can kill young kittens. Calici virus causes high fears, diarrhea joint pain and mouth sores. The mouth sores look like burns and can bleed.  Little kittens often don't recover from one of these serious viruses let alone having both! The other kittens needed special care but began recovering in a couple of days. Nakita, who was much smaller and weaker, was not doing so well.  Besides limping from terrible joint pain and having painful sores in her mouth she also had to breathe through her mouth, often gasping for breaths like they might be her last. She wouldn’t eat or drink so I had to hand feed her. 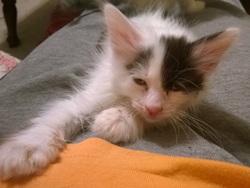 ​Even with hand feeding formula she would choke because she couldn’t figure out how to swallow without taking a breath at the same time.  It was a long and arduous process to feed a few drops of formula, wait for her to swallow, wait for her to take 5 breaths, then give a few more drops and repeat for as long as I could to get enough food in her to keep her alive. There were many times during the process where I wondered if I was doing the right thing by keeping her going. She would sneeze blood and I would wipe her bloody nose several times a day. But she had such a spark of life in her, and she was fighting so hard to stay alive I wanted to give her every chance possible to make it. Each time I checked on her throughout the days and nights I was expecting find her passed away but each time she picked her head up and looked right at me waiting for her next meal.

​It took two weeks, many conversations and visits to our vet and  several different medications but she got stronger and stronger and began eating on her own. I was so happy and relieved! It was at that time that I named her “Nakita” which means “unconquerable.” She really defied the odds. After a couple of weeks of eating on her own and beginning on the road to health she had another life threatening set back. She had extreme diarrhea and once again stopped eating. I went back to hand feeding her and determining what was wrong. It turned out to be a parasite called coccidia, which mom cats get from the soil and give to their babies. This is yet another killer of kittens, especially weak kittens like Nakita. I gave her and the other kittens Albon for 10 days and once again she proved to be unconquerable! After the first 4 days on the medication she returned to eating and playing like a kitten.  She was so happy and playing so much I think she was trying to make up for lost time. She was very loving and glued to me, climbing me like a tree not concerned at all that her nails were sharp as razor blades!  What a relief to see her so active and healthy,  I thought I could relax and that she was now going to make it!

……..A couple of weeks later I noticed her sleeping a lot,  she wouldn’t get off the couch, stopped playing and stopped eating. My heart sank. She began to vomit violently and off to the vet she went. I could only imaging that she ate something that she shouldn’t have and she had some kind of blockage. After observing and testing her for a few hours Dr. Dave Sandefer from Sand Road Animal Hospital, said he could feel something hard in her but couldn’t tell what it was. So despite her weakened state she went to surgery. Dr. Dave found that she had not eaten anything foreign she actually had a telescoping intestine, Intussusception, a rare and potentially life-threatening condition that can occur in cats and dogs of all ages. Dr. Dave said that this is a hard surgery for any animal to survive, let alone a 3 pound kitten who had already been through so much. This was going to be her biggest battle yet. We all hoped for the best as Dr. Dave removed 12 inches of intestine from her tiny body. Dr. Dave said she can loose that much intestine and live a normal life, if she survives. 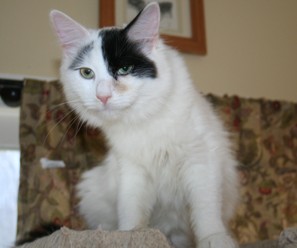 ​The next 48 hours were crucial but he said it would be 2 weeks before we could relax. Each time I called for updates she was still with us and improving. She wanted to eat only a few hours later and she pooped the next day! To everyone’s amazement this “unconquerable” kitten defied the odds again! Nakita is growing and eating and playing like a kitten should! She is amazingly loving and that spark I saw the first moment I met her is in her eyes very time she looks at me. She is getting into trouble, wrestling with her big brothers, knocking things over and living her kittenhood to the fullest. She loves to be hugged and kisses my face. She is thankful for her chance to grow up and grow old with love and care.