Vladimir and Olga, siblings reunited after a year apart! 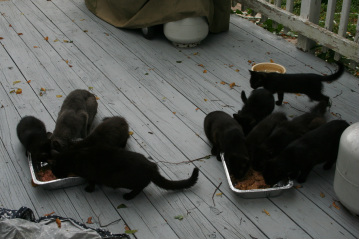 Vlad and Olga with siblings and cousins before their rescue
It was quit the scene on Maida's porch! She starting feeding a couple of stray cats that wandered over from the next door farm during the winter. Come spring she got a surprise -- 14 black kittens!

Maida reached out to BDRF at the end of summer and we came to see what we could do. We had to act fast because the kittens were getting older and more skittish with every passing day -- making them less and less adoptable.

Over the course of a couple of weeks we managed to trap all 14 kittens and get the adults spayed and neutered. 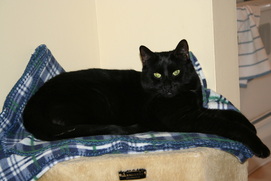 Tyler in his foster home
Among this group were two cats we named Olga and
Tyler (AKA Vladimir). Both kittens were about 5 months old already and were very skittish. Olga came around quickly and although shy,  she was an affectionate and friendly girl. Tyler was semi feral but not aggressive. He needed some work. Tyler's foster mom considered him the "coolest cat" she'd had and she went to work trying to win his trust. 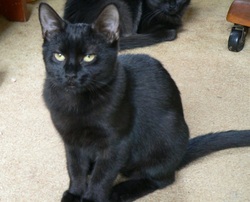 Olga in her foster home
One day we received an application from a wonderful
adopter, Brian. Brian had fallen in love with Olga from her photo. He was looking for a companion for his aging kitty, Gypsy. Brian adopted Olga and after a short time she was becoming a great companion to both Gypsy and Brian.

Tyler started to come around to his foster mom, still unsure about being picked up and definitely not approachable by strangers. But he had a great personality and just needed the right home.

A year passed and no one was interested in Tyler because of his shy nature. 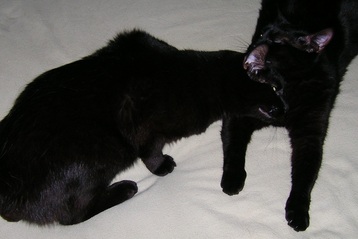 Vladimir and Olga, together again
Then we got an e-mail from Brian that his beloved Gypsy had passed. While he was still grieving her
loss he needed to get a friend for Olga who was also grieving and lonely. We had some cats that I thought would make good companions for Olga, but I had not considered Tyler because he would be so shy. When Brian paid us a visit to see some of the cats he was not really feeling a connection to the ones I had suggested. But he was very interested in Tyler, who was staying in the
background. I told him that Tyler was actually Olga's brother. Brian has a calm and accepting way about him, perfect for shy cats, so it wasn't a total suprise that Tyler allowed Brian to pet him, Brian wanted to give him a try.

We knew Tyler was going to have a tough adjustment; it's always upsetting when they are so frightened and they don't know how good it's going to be. As expected, Tyler now named "Vladimir", went into hiding for several months. He befriended his sister almost immediately and the two seemingly continued right where they let off a year before. It took him a while to warm up to Brian but patience and kindness won the day. We received many updates from Brian like this one,

"Dear Yvonne,
Vladdy is now becoming a good friend to me. He is still a little mercurial in his responses, e.g., he may hiss if he is frightened, but that is happening less and less often. The rapport between Olga and Vladimir is glorious to behold! They usually spend most of the night playing together. Olga loves to groom her brother. She may now be the world's happiest cat!"

Olga and Vladimir remain inseparable. You can say that they don't remember each other, that they
don't know they are siblings but I believe they do. I believe they have a bond and their own indiviual scent that is recognizable between families. No matter what you want to believe it couldn't be a happier outcome for two unwanted farm cats!