This poor sweet young cat had a rubber band around her neck so tight that it had cut through all of the layers of her skin and was cutting off her breathing. The wounds was severe and shocking. This rubber band was placed their intentionally by someone who was incredibly cruel.  This cat had obviously struggled to remove the rubber band herself and got it half way over the top of her head catching it on her ear which only tightened it more. 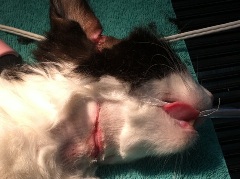 Now sitting tightly at the base of her ear, the rubber band had also cut through the ear severing it partially away from her head. Even with this unspeakable pain she remained calm and allowed Paula to help her. Paula cut the rubber band allowing her to breathe better. The damage was serious and we feared the worst. Paula took her to the vet where they immediately took her into surgery to repair the damage, close up the wounds and hopefully reattach her ear. 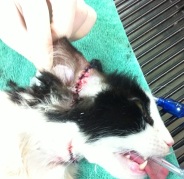 The vet estimated that the rubber band was there for 7 to 10 days slowly cutting through her skin and into her muscle, she was not far from dying. Amazingly the vet was able to repair the damage,  sow up her wounds and reattach her ear.  We named her "Grace".  Through the entire ordeal Grace could not have been more sweet and gentle, she quickly became a favorite with the vet staff as she recovered in their care. 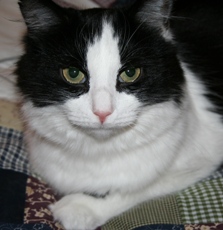 Today Grace is fully healed and more beautiful than ever. She is grateful for this second chance.

BDRF's mission is to continue to rescue and care for cats like Grace. We believe every cat, despite the cost, deserves a second chance. This is an expensive goal.  If you would like to support our mission  you can make a tax deductible donation; by mail to PO Box Woodbury, CT 06798, or  online
"Most of the important things in the world have been accomplished by people who have kept on trying
​ when there seemed to be no hope at all."
- Dale Carnegie
Your donation is tax deductible